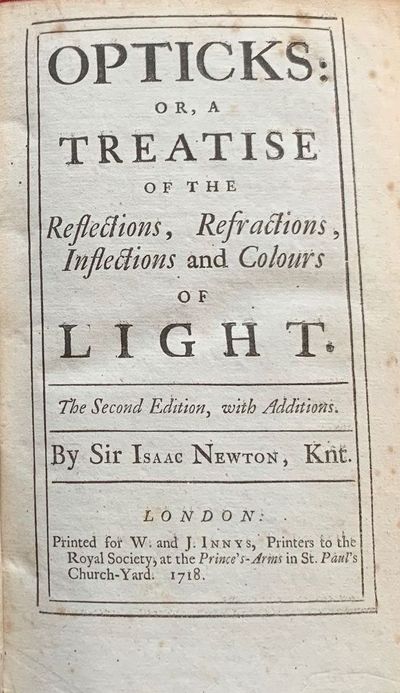 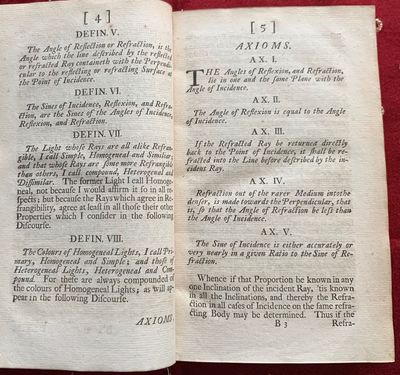 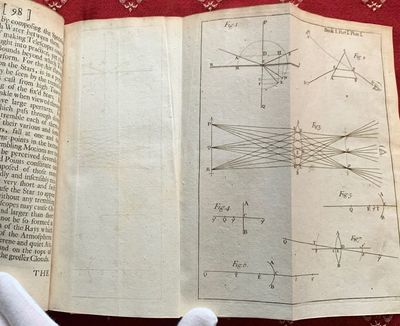 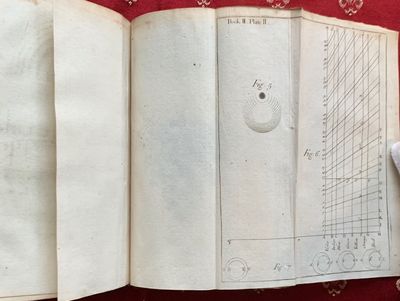 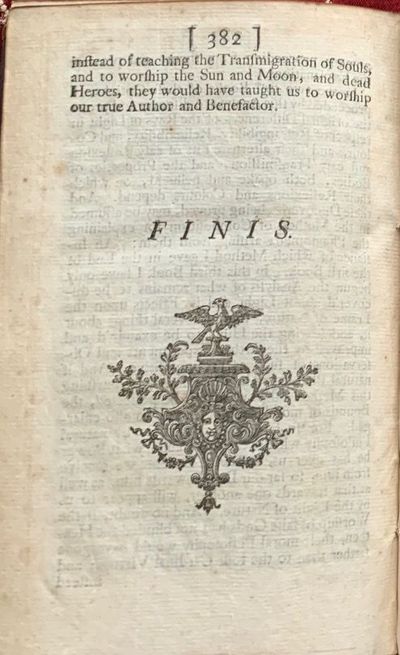 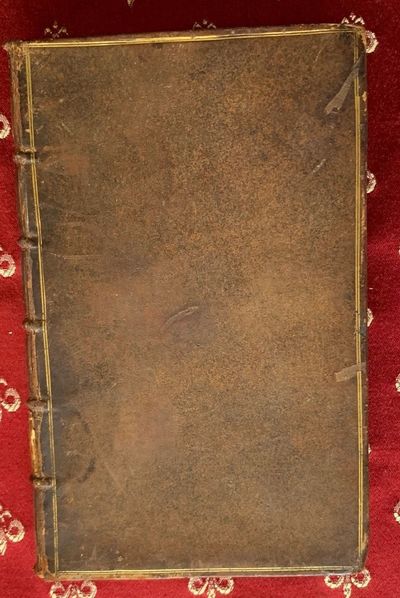 Previous Next
Illustrated with 12 folding engraved plates of optical/geometrical diagrams and a few woodcut diagrams and tables in text; large woodcut decorative tail-pieces, head-pieces and initials.

The first edition appeared in 1704 in quarto. For this second edition the plates were newly engraved to fit the new octavo format. The most important feature of this second edition is that the number of Queries at the end was increased from 16 to 31, including the celebrated Query 28 on the nature of light. The Queries in the initial set were rather brief, but the later ones became more substantial, written as short essays filling many pages. (Babson 134; Gray 176; Wallis 176.)

The particular importance of the series of Queries included at the end of Book III of the Opticks has been emphasized by numerous researchers and bibliographers. The Queries contain Newton's thoughts and insights on the future directions of scientific inquiry on the nature of matter, and had a profound influence on the development of modern science. The Second Edition contains, in particular, the first appearance in print of the celebrated Query 28 on the nature of light and Query 31 which presents Newton's only chemical writings (apart from the De natura acidorum), making this edition especially desirable. Query 31 proved immensely influential, as, among other things, it launched affinity chemistry and inspired the dozens of affinity tables that were made in the 18th century, based on Newton's description of affinity gradients.

Opticks contains Newton's summarization of his discoveries and theories concerning light and color, from his first published paper onward, and include his work on the spectrum of sunlight, the degrees of refraction associated with different colors, the color circle, the rainbow, "Newton's rings," and his invention of the reflecting telescope. Other subjects include questions of gravitation, metabolism and digestion, sensation, the circulation of blood, moral philosophy, the inductive method, and the vivid images haunting the dreams of madmen.

With armorial bookplate of Richard Pryce of Gunley, high sheriff of Montgomeryshire; with 2 small stamps for the private library of Hugh Selbourne, M.D. Binding slightly rubbed with a few minor scuffs; spine label slightly chipped and faded; ends of spine slightly chipped; short crack to top of front joint. Interior near fine with only occasional minor spotting, mainly marginal; a few small rust-spots; a few plates slightly misfolded. In all, a fine, wide-margined copy with the publisher's advertisements at the end. Scarce.

See other items from this exhibitor